and water a whole, a hole where

the use of a bowl lies,

a container for the

that stores, that preserves,

that is produced on the potter’s wheel,

between her and her hands full of clay,

over and over again.”

Our hands create the world, they shape it: we need around three years to master their use and a lifetime to be able to sophisticate it. “One hand washes the other one and both wash the face”, and in the precise movement of this ordinary gesture, the first container originated, the most basic technology to collect water. Together they made a precarious bowl, an accidental cavity, temporary, that later they transferred into matter, into clay. In our stories, the hands have joined powerfully to show that we are present by means of touch; they have healed, rocked a baby, planted the soil, harvested the fruit, and kneaded the dough. In this reunion, they have summoned vulvas, animals, or hearts; we could say in fact that the hands are the outcome of an almost perfect alchemy between mind and heart.

Several manual gestures such as putting pressure on clay, staining paper, or caressing skin converge in Lucia Pizzani’s work, Manto, her first individual exhibition in Galería la Cometa, Madrid. Together with some of her other works, we travel through different places and moments, that even if they are recent, they have the knowledge and the ancestral material tradition that the artist inherited, the same as a relationship with nature that is abundant in knowledge, fertile for the soil and the imagination. In her pieces, the crudeness of the material coexists with the sensual organicity of the shapes: the clay undresses like the artist does, the paper undulates as the skin striates.

All the surfaces preserve their memories, that of all objects, like a shell: a cover that incarnates and narrates. In her videos Manto (2020) and La que viste la piel final (2019), the skin turns into a file, a canvas for history. The body appears enigmatically sheltered by the mask and other bodies, other beings that connect it to the ground, the forest, the universe. Second layers that are with us even before we were born, already in the womb; thus, the need to cover throughout our life: to find shelter in a cave, in the first arms, in future arms.

Dermis and container. Pizzani texturizes her pottery in black and red ceramic, with the corn kernel or the seed of the Mexican jumbay and with these she paints a delicate pattern, haptic, organic but recurring. In Escritura (2020), she models from intuition and desire, twenty-four wall sculptures that make up her own sign language that is visual and tactile. From masks to snakes, there is a contained tension between the organic and the symbolic abstraction and a discreet figuration that explodes in Tótem ánima, Tótem felino, Vientres dúo, Cadera and Red Venus (2021 – 2022). In these last ones, we sense a dismembered body that is willing to shelter and support other bodies: the shapes that are made with strength and determination, are ready for the offering, and debate between what is animal, vegetable, and human; simplicity and mystery; erotic and abject.

Likewise, the combination of direct light and a plant impregnated the paper with a mark to produce Solar (2021), a series of solar impressions made with local plants and photosensitive inks that capture in images the summer solstice of 2021. They elevate themselves as a homage to the sun, the earth and the autochthonous Oaxacan vegetation, that once again gives place to shapes between vegetable, feminine and grotesque: seed, flower, fruit, pod, vagina, oval or mask.

There is something oneiric in Lucia Pizzani’s works that transfers me to a place where we let the monster come out without succumbing to monstrosity. There we confirm that there is no life without pain, and it is precisely there where the only possibility of real life exists. When the hands get together, they offer us a frame, a way of looking to the outside from the fragment; of making stories based on the reunion, of the accumulation of images whose execution don’t require complex technologies. Fiction, dreams, mutations, intuitions, or popular beliefs work together as resilient spaces, of knowledge incarnation, like doors or windows to go in and out of a world that can be sketched in constant reformulation.

Installation of 24 pieces of textured black stoneware with corn 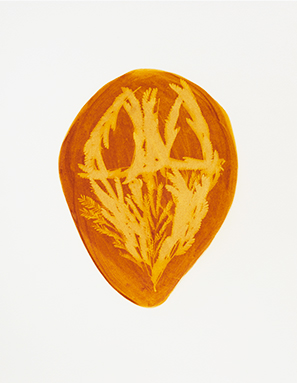 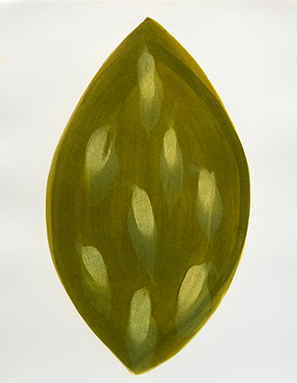 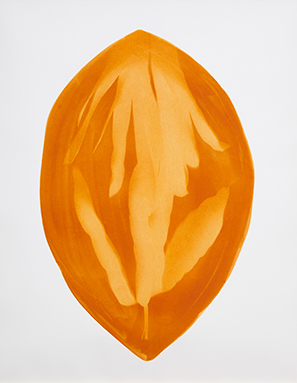 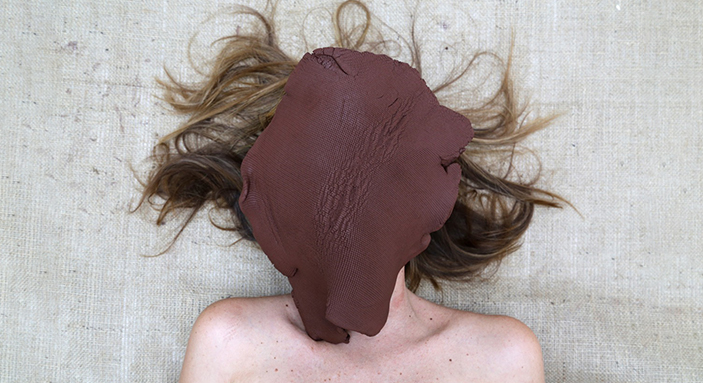 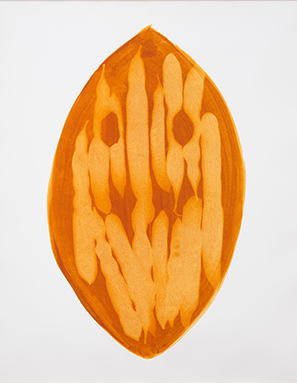 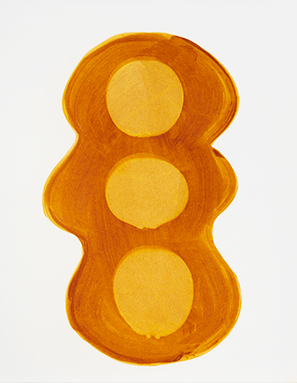 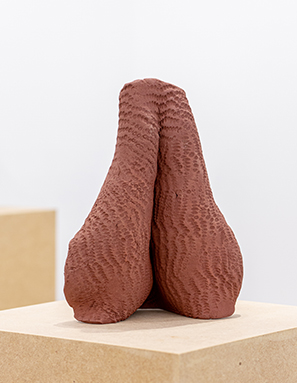 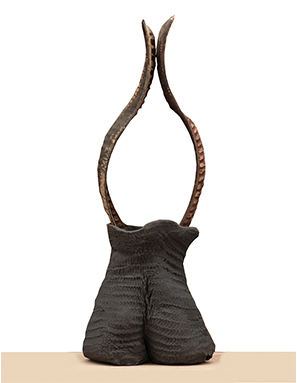 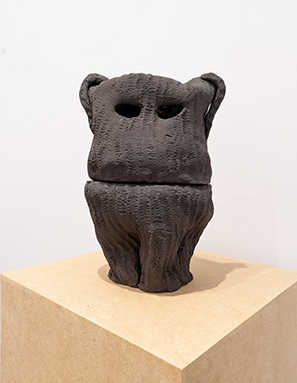 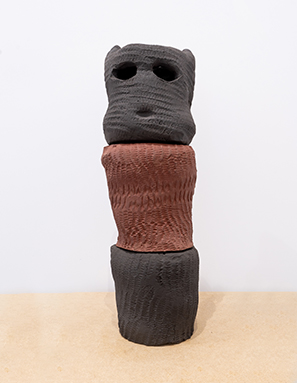 His recent projects and artistic residencies include Casa Wabi and the Puerto Escondido Botanical Garden (Oaxaca, Mexico), LaunchPad Lab (Charente, France), Peckham24 Festival of Photography (London), and PlanetB exhibition curated by the French philosopher Nicolas Bourriaud which opened in Venice in parallel with the 58th Venice Biennale in April this year.

Her work was recently acquired by the TATE Collection and is also part of the Essex Collection for Art from Latin America ESCALA, the Patricia Phelps de Cisneros Collection (CPPC), the Catherine Petitgas Collection, the Urban Photography Archive, the Eugenio Mendoza Foundation, the Juan Yarur Collection and the Museum of Latin American Art (MOLAA), among other public and private collections. 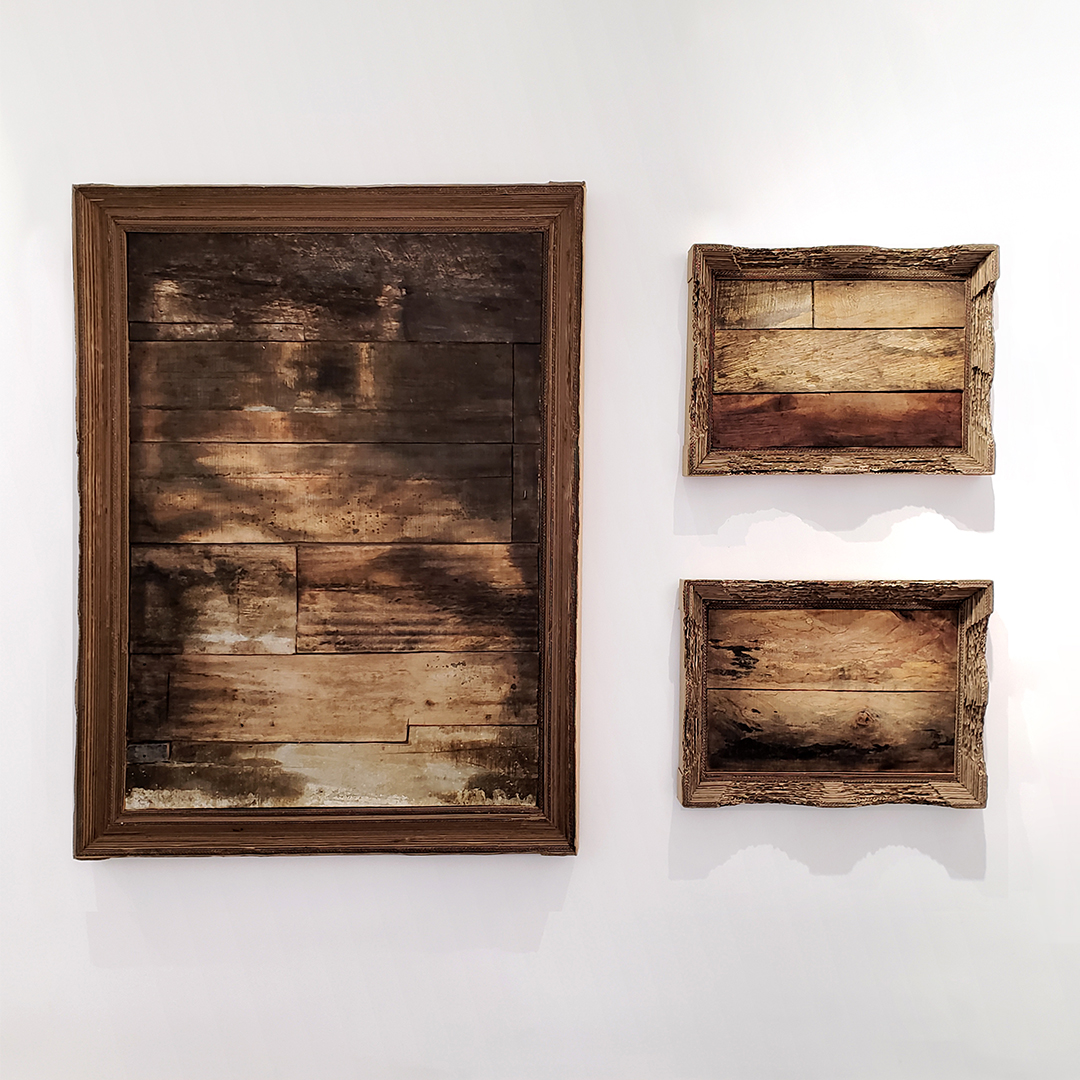